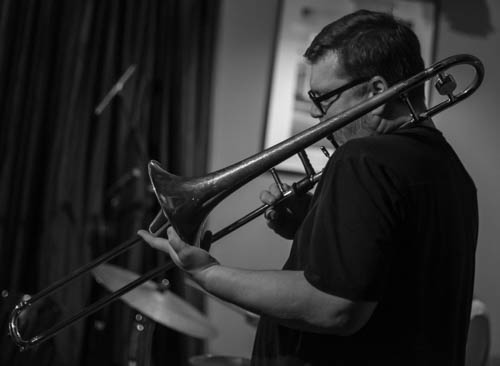 Jeff Albert is a musician, music technologist, and educator. He has been named a Rising Star Trombonist in the Downbeat Critics Polls each year from 2011-2019, and performs regularly in the New Orleans area, and throughout the US and Europe. Jeff wrote the horn parts and played trombone on Bobby Rush’s album Porcupine Meat, which won the 2017 Grammy for Best Traditional Blues Album, and was the horn arranger and trombonist for The Meters from 2015 until their final performance in 2017. Albert performed on Pretty Lights Grammy Nominated 2013 album Color Map of The Sun. In 2013, the Paris based record label Rogue Art released his CD, The Tree on the Mound, which features Kidd Jordan, Hamid Drake, and Joshua Abrams. In addition to leading his band Unanimous Sources, Jeff is a member of Hamid Drake’s Bindu-Reggaeology band, and co-led the Lucky 7s with fellow trombonist Jeb Bishop. In addition to his work with world renowned improvisers, he has been a member of the bands of New Orleans greats George Porter and Wardell Querzergue, backed artists like Stevie Wonder and Bonnie Raitt, and performed with the Louisiana Philharmonic Orchestra, and the New Orleans Opera.

Jeff is an Associate Professor, and Director of the School of Music Industry, in the College of Music and Media at Loyola University New Orleans, and in May of 2013, he became the first graduate of the PhD program in Experimental Music and Digital Media at Louisiana State University, where his teachers included Stephen David Beck and Jesse Allison. He also holds degrees from Loyola University – New Orleans, and the University of New Orleans, and has served on the faculty of Xavier University of Louisiana and the University of New Orleans. Jeff’s areas of research include improvisation, performance paradigms for live computer music, and audio pedagogy. Jeff has given presentations at the conferences of the Society for ElectroAcoustic Music in the United States, the Symposium for Laptop Ensembles and Orchestras, the International Society for Improvised Music, the Guelph Jazz Festival Colloquium, and the inaugural Symposium on Integrated Composition Improvisation and Technology. His article “Improvisation as Tool and Intention: Organizational Approaches in Laptop Orchestras and Their Effect on Personal Musical Practices” was published December of 2012 in Critical Studies in Improvisation/Études critiques en improvisation.

Jeff was the founder and chief instigator of the Open Ears Music Series which ran from 2007-2016, currently instigates the Common Tone Music Series, was a founding board member of the non-profit New Orleans International Sound Exchange, and writes the blog Scratch My Brain.

Listen to "Live at the Hungry Brain" on Spotify or Apple Music.

Listen to "New Normal" on Spotify or Apple Music.

Listen to "Staffa" on Spotify or Apple Music.

I also use Pro Tools or Studio One for (almost all of my) mixing and Studio One for mastering. I do some of my weird sound making with Max 8. I am usually happy to nerd out about gear, so feel free to email me.